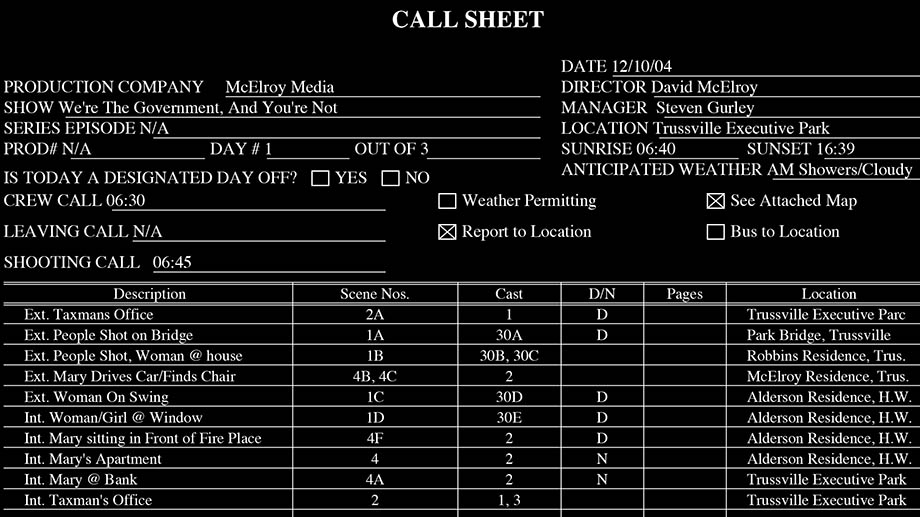 On Dec. 10, 2004, a small film crew gathered at 6:30 in the morning for the first day of shooting on a short film. It was only a three-day shoot — with some pickup shots on a fourth day — but everything was planned in detail.

For more than a year, I had struggled to take the germ of an idea and turn it into a film. I had recruited someone I knew in local video production to help me find a crew. Some of the people we recruited were fantastic and some turned out to be nightmares to work with. Some did their jobs and others were dumped along the way.

The process was really ugly at times.

I didn’t know how to write a script. I had to figure out how to structure something entirely different from what I’d ever written before. I had to trust production people who I barely knew. And I couldn’t afford to get better people (or paid actors) because I had a grand total budget of only $8,500.

The three full days of production were hard work. A lot of things didn’t go right. There were times when we hadn’t yet found the actors to stand in shots for the scenes that we were driving to a location to film at that moment. And I was always painfully conscious that I didn’t know enough about what I was doing. I got so stressed out toward the end of the first shooting day that I pulled the director of photography into a room privately and said, “I’m so stressed that I’ve forgotten what we’re about to do. Please help me here.”

But in the end, I made a modest short film that I’m proud of. It won a handful of awards and was shown at 25 film festivals in five countries. What I’ve realized lately is that the ugly creative process is just as important as the final film — and it’s time for me to open parts of my process to you.

If I’m going to be serious about changing my life — and becoming the artist I need to be — I’m going to have to show you the ugly parts of the process that I hope will create my films of the future. So here’s what I’m working on.

END_OF_DOCUMENT_TOKEN_TO_BE_REPLACED

As the phone call went on, I felt more and more annoyed.

I was talking Wednesday afternoon with a business associate and we were trying to solve a problem. We were both intent on resolving the issue and we both wanted the same outcome. But I found myself fuming.

In my frustration, I wanted to shout, “What’s wrong with you? Are you an idiot? Just let me handle this my way.”

I have no way of knowing what he was thinking — and we both remained professional and polite — but I could tell he was frustrated that I wouldn’t see things his way, too.

It wasn’t until an hour or so later that I could think calmly and rationally about the argument. I still wanted to blame him for not seeing things my way — since I was obviously right in my own mind — but I could be objective enough to realize what the problem was.

And I found myself thinking — not for the first time — that most of our so-called miscommunication in personal relationships comes because each of us makes wrong assumptions about what the other person must be thinking.

So I unconsciously hold you responsible for what I assume must be in your mind. If I’m wrong — as I probably am — I might be hurt or angry at you for something you never even thought. And you might be doing the same thing to me.

END_OF_DOCUMENT_TOKEN_TO_BE_REPLACED

The teen-ager’s tone suggested he was sharing really big news.

“Did you hear that Bob Saget died?!” he asked me breathlessly.

I told him I’d heard that, but he apparently didn’t think I was suitably impressed. He added something about who Saget had been — that he had been a comedian and a big television star.

“And he died,” he said again, as though giving me another chance to be shocked or upset.

“Almost 8,000 people die in this country every day,” I said. “I didn’t know Saget, so his death doesn’t really affect me any more than the deaths of those other people.”

“But he was famous,” the teen repeated, confused. “He was on television.”

I’ve had variations of this conversation with many people over the years, and it still confuses me. I feel the same way almost every time a “celebrity” dies. I experienced the same thing last week when former actress Betty White died.

I don’t typically have negative feelings about such people, but their deaths rarely mean anything special to me. And every time I hear the loud outpouring from those around me — people who also didn’t know these celebrities — I’m baffled that our culture has trained us to feel something special about random celebrities.

We’ve been subtly brainwashed into believing people are special if they’re famous.

END_OF_DOCUMENT_TOKEN_TO_BE_REPLACED

The moon is just a giant backlight for the bare wi

At sunset Tuesday evening, a cement plant in Leeds

I’m fascinated by photos which overlay man made

Merlin just ambled across the office for a drink o

I asked Lucy to show me how she really feels about

Unsurprisingly, Thomas has absolutely no interest

Six years ago this evening, a scared young dog cam

Lucy seems to be enjoying the warm sunshine today.

Six years ago this evening, a scared young dog came to live with me. She was so terrified on the ride to my house that she pooped in the back seat of the car. She had originally lived her life on a chain as a puppy. Then she lived among far too many other animals in a cramped apartment, where she was pushed around by bigger dogs. I was told she would always be a “special needs dog” and would probably never be much more than the scared girl she was then. But with a lot of love and patience, a very different dog emerged in the coming months. Now that she’s been with me for six years, it’s hard to imagine her any way other than she is today — as the World’s Happiest Dog®. One day, she’s going to tell her own story on her own podcast. You’ll subscribe when she gets started, won’t you? This loving girl deserves it.

It was obvious to me in the late 1990s that western society is heading toward social and economic collapse. When I told other people back then, most thought I was crazy, because they saw their society as stable and booming. But more and more people have slowly been coming to the same conclusion. And now, even the wealthy and powerful seem concerned. A new report from the World Economic Forum says the erosion of “social cohesion” is what we should fear right now. (Full report here.) Although I disagree with a lot of political spin that these elites put on the dangers ahead, I feel certain that we are headed toward social collapse. And most people will not prepare for it. The book that started me down the road of thinking about this came out in 1993. I thought its reasoning was impeccable, but that the time frame would be longer than the book expected. I still find that book a useful foundation for thinking about the issue — “The Great Reckoning,” by James Dale Davidson and Lord William Rees-Mogg — even though its predictions are out of date. Dark days are coming. Smart people are going to have a plan to get out of the way of what’s coming. Will you?

Since I posted my audio discussion a couple of nights ago about some recent realizations I’ve had about myself, several people have asked for more about what I quoted from Jordan Peterson. The Canadian psychologist is controversial to some — and I don’t always agree with him — but I’ve found his lectures about art and its relation to psychological archetypes very useful. You can find him here talking about art being more about process than just result, which contains the material I quoted. Here’s another video from a lecture in which he discusses how artists mediate for the rest of society between the known and the unknown. And here’s another portion of a lecture at an art exhibition in which he talks about the necessity of artists for society. And if you missed my audio from two nights ago, here’s a link to my discussion about some things I’ve learned about myself and some things I need to change about myself as a result.

I just realized it was four years ago today when I came uncomfortably close to dying. I don’t remember how blunt I was publicly about this at the time, but the surgeon who operated on me made it clear afterward that I had been much worse than he had thought. My gallbladder was inflamed and I had been in tremendous pain, but what the doctors didn’t know until they started is that the organ was close to rupturing. Surgery that was supposed to take half an hour took two or three hours, because my gallbladder was so diseased — the surgeon’s word — was falling apart as he tried to remove it. I had gone to the emergency room at St. Vincent’s Hospital (the same one where I was born) and was kept for emergency surgery the next morning. I should have been home that night, but I had to stay in the hospital three days instead. The weird thing is that I never really believed I could have died. Maybe it was just denial, but I didn’t feel as though it was my time. I thought I still had a lot of life left to live. Four years later, I’m grateful to be alive, but I feel as though my life is still on pause. It’s been a blur. I still feel as though I’m waiting for “the rest of my life” to start.

Is “The Nightmare Before Christmas” really a Christmas movie or a Halloween movie? It’s both, making it a delightful mashup of themes and images from two very different holidays. Although Danny Elfman’s score was nominated for several different awards, Elfman wasn’t a typical composer for film scores. Up until he started working on films with Tim Burton, Elfman had been a rock-and-roll artist best known as the leader of the new wave band Oingo Boingo in the 1980s. Just this week, I heard an interview on the podcast Song Exploder on which Elfman explains how he came to write the music for the movie, including why he approached the music for the film very differently than he had approached writing rock music. I enjoyed the 20-minute interview and if you happen to love the film, this Christmas would be the perfect time to learn more about how the score came to be. Tap or click below to listen. Listen here.