As I observed the people around me in the restaurant Sunday afternoon, I felt annoyed. I didn’t like these people — and I don’t figure they would really like me.

If I described the things I didn’t like about these folks, you would probably feel as though I was being petty. Maybe even judgmental. They didn’t look like me, talk like me, or act like me. Everything about them rubbed me the wrong way.

I feel this way a lot lately. I suspect most Americans feel the same. In our own varied ways, most of us are asking, “How could this be possible in my country?”

In a world where the words and actions of people who disagree with us are slammed into our faces by 24-hour news media, most of us have a vague sense that something’s wrong. Some react by saying, “I want my country back,” but what they’re really saying is what we all feel. We all long for a place that feels like home.

END_OF_DOCUMENT_TOKEN_TO_BE_REPLACED 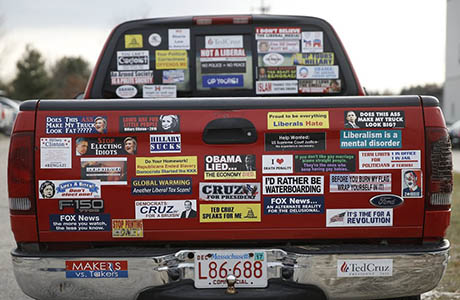 “What’s going on,” the new guy asked his cellmate.

“We’ve heard all these jokes so many times that we just give them numbers to make it quicker to tell them,” the prison veteran explained.

“Can I try?” the new inmate asked.

“Sure,” his cellmate said.

So he waited until a break in the laughter and he called out, “87!” There was dead silence except for a few groans. He looked at his cellmate with a confused look and asked what happened.

“Well,” said the cellmate, “some people can tell a joke and some can’t.”

It’s an old joke — and I heard it as a child — but it reminds me of political discussion online today. Almost nobody has anything of substance to say, so they just throw shallow nonsense at each other — links, memes and bumper stickers. These shallow people pretend they’re promoting what they believe in, but they’re doing nothing of the sort.

END_OF_DOCUMENT_TOKEN_TO_BE_REPLACED

What we call the news has become “hate speech lite” for people who see themselves as too sophisticated to be guilty of hate.

Because they’re listening to news media — and to angry friends on social media — they’ve mostly accepted the narrative that the way to stop hate is to vote for Democrats in congressional elections. In reality, voting for anybody is just a way to keep the cycle of hatred going on and on and on.

The best thing you can do to fight evil is to turn off electronic media — to stop the alarmist hate you hear from almost everyone there — and to deal with the people around you in kindness and love. The answers you’re looking for won’t be found on cable news or social media.